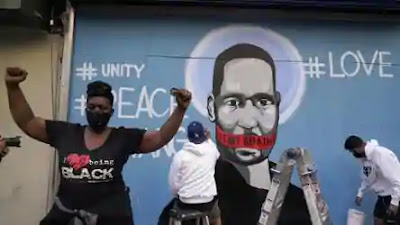 George Floyd was quite a responsible community leader.He was not near his in home when that bad incident happened. He was murdered by Minneapolis police in public place. He was dragged from his car by the Minneapolis police officers and hold on to the ground even he was screaming  for breath but the police officer forced his full power until he died. He was non-violent unarmed and begging for mercy in broad daylight .the video clearly shows that the officer's misbehavior. The innocent man justice should be found.

George Floyd was well known as to his close friends as "Big Floyd". We want you to know the Big man before he was murdered by cops. George spend his childhood in Houston Texas, in Third Ward Cuney Homes. He was an athlete. He finished his schooling from Yates High School. He was in the school football team in 1992. they championed in-state football league.

The big man was very helpful, peacemaker, and minister and someone to take advice from. He was a father and a lovely brother he had a family. He loved his family and he always wanted to give him a better future but now he can't. He moved to Minneapolis because of better work possibility. he used to drive trucks and he also worked for a restaurant as a security guard. He was hardworking. wherever he went he always the same person caring and kind spirit.

On 25th May, 2020, George Floyd was arrested by the Minneapolis police in America. when he was using a counterfeit 20 dollar note in a grocery store. The police officer who arrested Floyd tortured him mercilessly and in a brutal manner During the arrest, the police officer placed his knee on the neck of Floyd for around 9 minutes until Floyd died.The entire incident happened on a public street.


The video evidence is enough to prove that what they did to this innocent man. Let me explain very shortly for you He was murdered by Minneapolis police officer Derek Chauvin. He dragged from his car and pinned to the ground and he murdered him.This incident brought to light the matter of police brutality-.a police officer took someone's life for such a petty crime.

And it isn't that the people who were watching around were trying to stop  the officer.It is clear in the video evidence that the people were shouting loudly to revoke his knee and handcuff him and out him in the police van if he has done anything wrong so arrest him and that he could not breathe with the knee over his neck But the police officer did not pay heed and eventually, George Floyd died. And when this video is circulating all over the internet, then the entire world's people knows everything.

So , George Floyd, who was killed, was actually of African- American descent/Black race and the police officer who killed him belonged to the White race .So the racial divide between the blacks and the whites also came to the fore due to this incident. The people began to complain that the police system in the US is biased against the blacks.The US police targets the black people more.This is the reason why the Black lives matter organization was the most outspoken in these protests Black lives matter is a human rights organization that supports racial equality .And their demand is to put an end to the violent against not only the black people in the US.all lives are valuable.

Negative Side of Protest

On the flip side, talking about violence, there were several incidents where the protesters turned violent They resorted to arson and looting. This is something that we should not support. We can see several cases in the social media where the people were trying to justify violence in a subtle manner .I did not find this appropriate at all. As compared to Hong Kong protesters who were taking extra steps to remain non violent.This was a major difference between this Black lives matter protest and the Hong Kong protest. They were not making efforts to keep it non violent.  Cases of white people who pretended to join the movement and resorted to violence were also seen. Cases of police unleashing violence on these people were also seen .Tear gas and rubber bullets were fired on the protesters.

Those police officers were are involved in George's murder case they are all going through investigation. The four officers are fired and who killed the innocent man he has been arrested and charged with Floyd murder. The other remaining police officers who are involved in that case they should charge with Floyd murder. we all need all hands on decks to demand justice and they need to be behind the bars.